Home » All You Need To Know About Rawalpindi Ring Road. 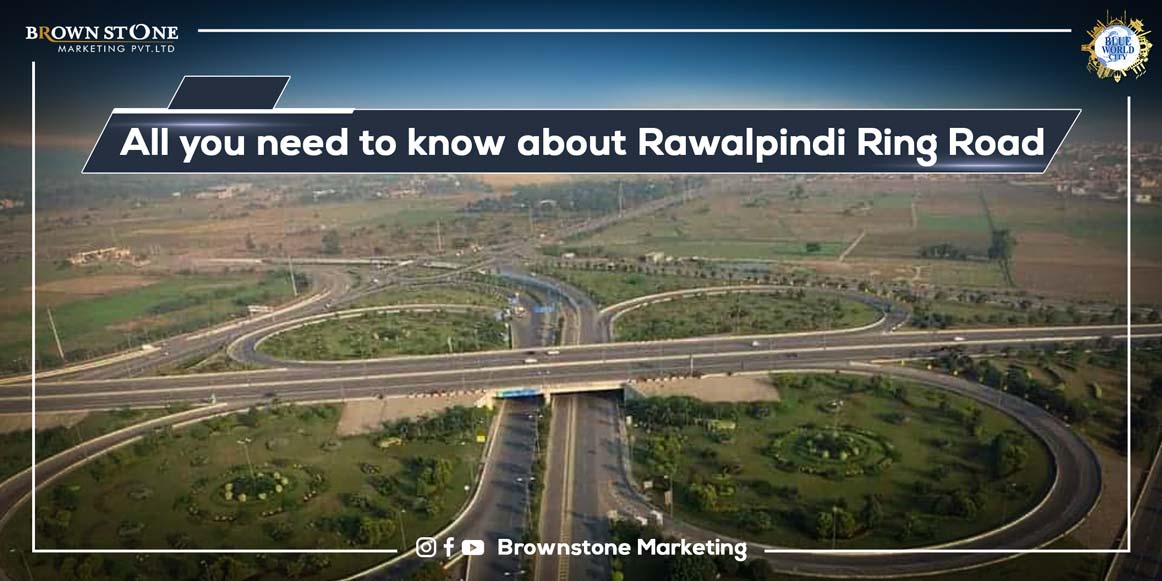 The urban areas of Islamabad and Rawalpindi play a crucial role in boosting Pakistan’s economy, and it is the third-largest metropolitan area by population. Roads and metro buses connect the two twin cities, but traffic and logistics make it difficult to navigate. The city of Rawalpindi is also a major logistics and transportation hub for northern Pakistan. Our country’s major national transportation corridor is National Highway N-5, a 1,819 km long highway. The highway connects the country’s major economic and commercial centers, including Karachi, Lahore, Islamabad, Peshawar, and Torkham. Approximately 95 percent of exports and 65 percent of domestic traffic flow along this highway. The Rawalpindi Ring Road is designed to facilitate and reduce traffic congestion on the N-5 national highway. The ring road will have a length of 65.3 km and three lanes on each side (110 m in width). From Rawat, the Rawalpindi Ring Road leads to N-5 Sangjani. The project consists of eight interchanges with four service stations, two on each side. It will ease congestion on the N-5 and facilitate connectivity.

Ring Road Rawalpindi will also make commuting easy for the people of the twin cities. It will improve public transport and provide space for commuter vehicles in Rawalpindi’s central areas. The ring road significantly benefits residents of the peripheral regions. Moreover, it will reduce vehicular noise, air pollution, and fuel consumption for residents caused by traffic jams.

Ring Road Rawalpindi’s new plan and map indicate that the road will begin in Rawat (near the Radio Pakistan Tower) and pass through Adiyala Road, Chak Beli, Murat, and Chakri Road. At the Thalian Interchange, this route will be connected to the M-2. The proposed Ring Road of Rawalpindi will benefit specific communities, including DHA Phase 2, Bharia Town, and DHA Phase 3. One can easily reach Rawat via thein just a few minutes through this route.

Ring Road in Rawalpindi provides access to many areas. The road connects Rawat Rawalpindi to Adyala Road near Radio Pakistan via Bahria Town Phase 8 backside. Then it continues to the Sangjani interchange. There will be eight interchanges on Ring Road.

All interchanges cross through various areas, and they will all be serviced from the ring road. In addition, it crosses the Islamabad-Lahore and Islamabad-Peshawar Motorways. Therefore, access to the Motorway will be quick and easy.

The government plans and executes every project for the benefit of the public. In this regard, the Government of Punjab designed Rawalpindi Ring Road, taking into account its many advantages, and they are as follows:

The ring road will be the primary connectivity means between the twin cities. The master plan will link various integral points in the town. Rawalpindi Saddar is located a few minutes away from the Radio Pakistan interchange on the ring road. As a result, residents of the area will be able to drive to the twin cities more efficiently than ever before.

The construction of the RRR will result in urbanization. Various rural and less developed areas of the city will be linked through the master plan to urbanize them to prosper to their full potential, such as the Motorway areas, the Chakri side, etc. RRR will also help boost the development of upcoming under-construction residential projects in the twin cities.

Since its announcement in 2008, the RRR has been divided into phases. A description of each stage is provided below.

The RRR was announced and planned more than a decade ago when the Punjab Province was ruled by the Pakistan Muslim League-Quaid (PML-Q). Mr. Chaudhry Pervaiz Elahi was Punjab’s chief minister at the time.

Rawalpindi Development Authority has been planning the ring road since 1997. Unfortunately, the project was never completed. Parvez Elahi’s government in Punjab conducted a new feasibility study in 2008 for Ring Road construction.

Previously, it was proposed that a private-public partnership be formed between foreign investors and the government to construct the ring road from Channi Sher Alam to Fateh Jhang next to the New Islamabad Airport. The project’s total length was 75km, and its total cost was estimated to be Rs 74 billion. Rawalpindi Development Authority changed the map and reduced the length to 54km.

These changes were made to minimize the project’s cost for the government to implement it using its resources. The Punjab government added ten new commercial and residential zones to the Rawalpindi Ring Road Economic Corridor (RRPEC).

The ring road under this phase (2010) was expected to be 70 km long and traverse all towns of Rawalpindi, allowing the rural areas to be connected with the town and cantonment.

However, the authorities explored ways of reducing the project’s total cost. To minimize the project’s cost, it was suggested that the road’s width or length could be reduced. In doing so, however, the objectives set for Ring Road would not be met.

The project was approved on the condition that the Planning Commission approves the project and the Axle Load Management regime is included. The project is estimated to cost Rs 23.6 billion. RRR has a total length of 38.3 km, approved by the present government. It will have six lanes.

Housing societies or properties near the ring road enjoy high demand and price. Construction of the RRR will increase the costs of nearby properties once construction begins.

HOUSING SOCIETIES THAT WILL BENEFIT FROM RAWALPINDI RING ROAD

Many residential communities are currently under construction around the ring road. The approval and development of the RRR will consequently increase their prices, and the demand for these plots may increase.

The following are some notable societies that will benefit from the RRR: